The Contingent Team is currently preparing one last final Bulletin that will be in the mail very shortly. It includes details of Pocket Money Refunds, the Australian Scarf competition as well as other upcoming International Events. The Bulletin should arrive in your mailbox by the first week of September.

The World Organization of the Scout Movement (WOSM) has been alerted to three reported cases of meningitis in the United Kingdom and suspected cases in Sweden involving Scouts who have recently returned from Japan to attend the 23rd World Scout Jamboree. Whilst these cases are not life threatening, we are truly saddened that this has happened and our thoughts are with the young people concerned and their families at this worrying time.

We understand that the health authorities in both countries have issued health advisory notices, informing Scouts who were recently in Japan to be aware of the symptoms. In Sweden, the health authorities have asked those who attended the Jamboree to seek immediate preventive treatment from their doctor or the nearest healthcare provider as a precaution.

We have been in discussion with the World Health Organisation about this issue. They advise that the most common symptoms of meningitis are neck stiffness, high fever, sensitivity to light, confusion, headaches and vomiting. If these symptoms occur, immediate medical advice should be sought so that treatment can be started as soon as possible.

Listed below are the meeting times for each departure airport. (You MUST arrive BEFORE this time to check-in.)

Where possible, one adult has been listed as the Airport Contact to assist with marshalling Contingent Members for check-in and boarding purposes.

A copy of our PowerPoint presentation used during the Gear Distribution is now available from the Downloads page of this website.

All Contingent members under the age of 20 must have a White Water Rafting permission form signed by their Parent/Guardian in order to participate in this activity. For those unable to complete these at the gear distribution days, please download a copy from the Australian Contingent website and return by mail as soon as possible in a spare Reply Paid envelope or direct to “Australian Contingent, PO Box 543, Wentworthville NSW 2145”. No form before departure will result in no rafting!

The Victorian Branch is hosting their Branch Interview on Saturday 18 April 2015. This is a group session for all Contingent Members to learn the expectations of representing Scouts Australia at an overseas event. Important information about preparing for your travel experience will be delivered by the Branch International Commissioner.

The Branch Interview will be conducted at the Victoria Scout Centre (152 Forster Road, Mount Waverley) commencing at 1pm. All Victorian participants should attend this session.

Our fourth Contingent Bulletin was delivered to all Contingent members in mid-March. You can also download a copy from this website.

The Join-in-Jamboree programme allows Scouts from all over the world the opportunity to learn more about the Jamboree experience and the culture of Japan in their own Scout Groups.

A souvenir Join-In-Jamboree badge is available from the Australian Contingent for $2 each, including postage to anywhere in Australia. The order form is available for Groups to download from the website. Why not organise a Japanese evening for your whole group to earn the badge together!

There is also a certificate template available for leaders to use for those that join the activities.

Merry Christmas everyone! Bulletin 3 is now out and on its way to your mailbox. Look out for the latest news and updates for our Contingent preparations.

Troop allocations have now been completed. Nick has done an amazing job to allocate all 28 Patrols and achieve a good representation from across Australia in each Troop. A full list of Patrols can be found in Bulletin 3. Troop allocations will be uploaded to the Online Registration System shortly.

All flights have now been finalised and paid for. Flight details have been loaded into the Online Registration System providing a personalised itinerary for every member of the Australian Contingent. All Contingent members should review these details and notify the Contingent of any errors immediately. Now is also the time to advise the Contingent of your passport details. Simply update your Passport information into the Travel Details page of the Online Registration System.

Since the last Bulletin, the Australian Contingent has received notice of three youth members that are now withdrawing from the Contingent. As such, we have three vacancies currently available for additional youth members that may like to join our journey to Japan. Please encourage anyone that may be interested in these positions to contact Aaron Wardle (wjcontingentleader@scouts.com.au or 0421 076 497) as soon as possible for further information about the registration process and payment arrangements. These places are likely to be very popular, so act quickly. Once these positions are filled, the Australian Contingent will be unable to accept additional positions beyond this number.

The second bulletin has now been printed and will be making its way to all Contingent members shortly!

The first bulletin of the Australian Contingent has now been mailed to all participants. Included with this bulletin are a Travel Form and Youth Member Questionnaire that must be returned to the Contingent as stated on the form. A copy of the June Payment Form is also included as well as your very own Australian Contingent Badge to wear on your uniform.

It is very important that you read the Bulletin thoroughly and respond to any requested tasks as soon as possible. All youth members should also pass the Bulletin to your parents for them to read as well.

A copy of the Bulletin is available for download under the Participant Info heading.

The badge has been designed to celebrate key icons of both Australia and Japan as we join together for this once-in-a-lifetime journey.

Australian icons are reflected in the image of a Kangaroo and the Southern Cross.

Japan is represented by the image of Mt Fuji and the red Hinomaru from the Japanese Flag.

The Japanese Kanji character – [wa] – symbolises the theme of the Jamboree: “a Spirit of Unity”.

The Australian Contingent Badge may be worn on the uniform from now until three months after the event (Friday 13 November 2015).

Congratulations to all of the adult members that have been successful in being selected as part of the Australian Contingent to the 23rd World Scout Jamboree!

All successful candidates should have received confirmation at the beginning of May confirming their status as a Line Leader or member of the International Service Team.

The Australian Contingent Team looks forward to having you join us in Japan in 2015!

The Lord Baden-Powell Society has announced grants for the upcoming World Scout Jamboree in Japan 2015.
“After many years of generous donations by our members to the Jamboree Appeal, the Lord Baden-Powell Society is delighted to advise that it will be allocating $50,000 to give Australian youth members, who would otherwise not be able to go, the opportunity to attend the World Jamboree.
This is the first time ever that the Society has made such a sizeable allocation to a World Jamboree, but given the proximity of the event there has already been a strong swell of interest - many young Scouts would view this amazing once-in-a-lifetime opportunity within their grasp.
The Lord Baden-Powell Society trusts the provision of these Grants will allow Scouts from each Branch, who would find the expense of attendance at the World Jamboree a financial impossibility, to benefit from experiencing an International Jamboree and the character building this will provide.”
After the Jamboree,  a written report (min 200 words) & electronic photo files from each grant recipient are required – this is considered a vital and positive element of the Scout’s training.
Each Branch will be coordinating the distribution of grant funding for their own members with individual grants of up to $4,000 now available.
Completed applications must be received by your Branch no later than 31 April 2014. Contact details for each Branch are now listed on the Fundraising & Grants page for applicants to register confidential expressions of interest.
Please remember that some Branches (e.g. ACT and Victoria) have their own separate funding available as well and these should also be considered for additional support.
16TH NIPPON JAMBOREE
The Australian Contingent Leader visited the 16th Japanese Jamboree in August to check out the site, local facilities and travel options. The latest information has been updated to the website with more details available from the information sessions listed below.

The Australian Contingent Team are hosting information sessions around Australia throughout 2013 to talk about the plans that will be in place for our travel to Japan in 2015.

If you have now been able to attend any of the information sessions held around Australia, a copy of the PowerPoint presentation is available from our Downloads page.

Additional information sessions will be scheduled in the new year. If you would like to enquire about an information night in your local area, please contact the Australian Contingent Leader on wjcontingentleader@scouts.com.au.

Online Registrations are now open on the APPLY NOW page of this website. Follow the link and be sure to select 23rd World Scout Jamboree from the menu.

All youth members that will be aged between 14 and 18 are eligible to attend (i.e. born between 9 August 1997 and 27 July 2001 inclusive)
Adult members are eligible for selection as a Line Leader or as a member of the International Service Team (IST).
If you are eligible to attend and would like to be kept informed of the latest information as it becomes available, please send an email to wjcontingentleader@scouts.com.au with your Name, Scout Group and Contact Details.
CONTINGENT LEADER MEETS AMBASSADOR FOR JAPAN
This month, Aaron Wardle had the honour of meeting with His Excellency, Mr Shigekazu Sato, Ambassador for Japan in Canberra to discuss early preparations for the Australian Contingent travelling to Japan in 2015.
The Ambassador is very passionate about the benefits of Scouting to young people and is very keen to support the relationship between Australia and Japan as the Contingent works towards the next World Scout Jamboree. 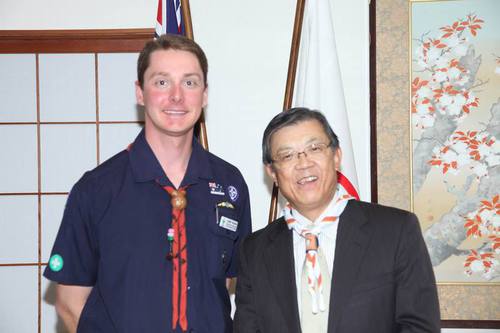 ASSISTANT CONTINGENT LEADER
This year we received a very large number of high quality candidates for the role of Assistant Contingent Leader. All of the applicants were very competitive and that is a great tribute to all of the participants in Sweden, and to the excellent work of Phil and Andi in promoting the role so well last year. After a very difficult selection process, it is with great pleasure that we announce the Assistant Contingent Leader for the 23rd World Scout Jamboree in Japan 2015 as Nicholas Bennett from NSW.
Congratulations Nick and to all of our other applicants. We look forward to seeing everyone apply to join the Contingent when online registrations open at the end of this year.
In the meanwhile, if you would like to meet Nick and other members of the Contingent Team, be sure to visit the International Tent at the next Australian Jamboree in Maryborough Queensland in January 2013!
© 2021 Scouts Australia. Website by MindVision Interactive.